Posted at 14:53h in Short Journeys by semlimite
Share

THE AZORES – JOURNEY TO SÃO MIGUEL 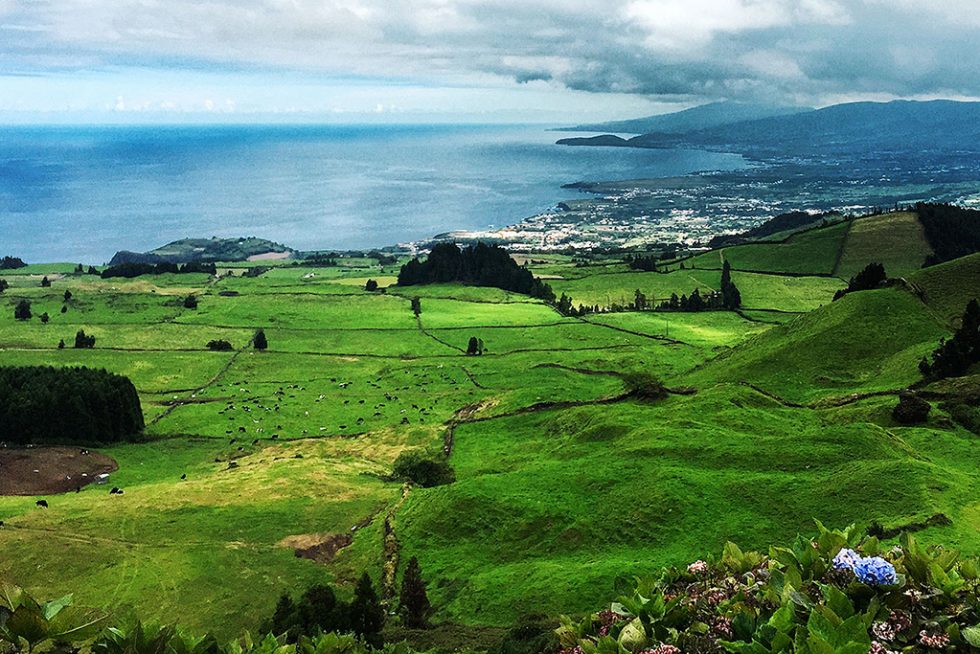 During the warmer months, different whale species pass by the Azores on their migratory paths. Today, whale and dolphin watching is one of the most sought-after tourist attractions, yet not so many years ago whale hunting was the most important activity in some of the islands.

Life here used to be extremely hard, so that is why many people left, especially to the USA, in the 19th century and until mid-20th century. The last great scatter was precisely in 1957 and 1958, when the Capelinhos volcano located on one of the islands erupted for 13 months, giving way for the departure of 2.000 people to the USA and Canada. 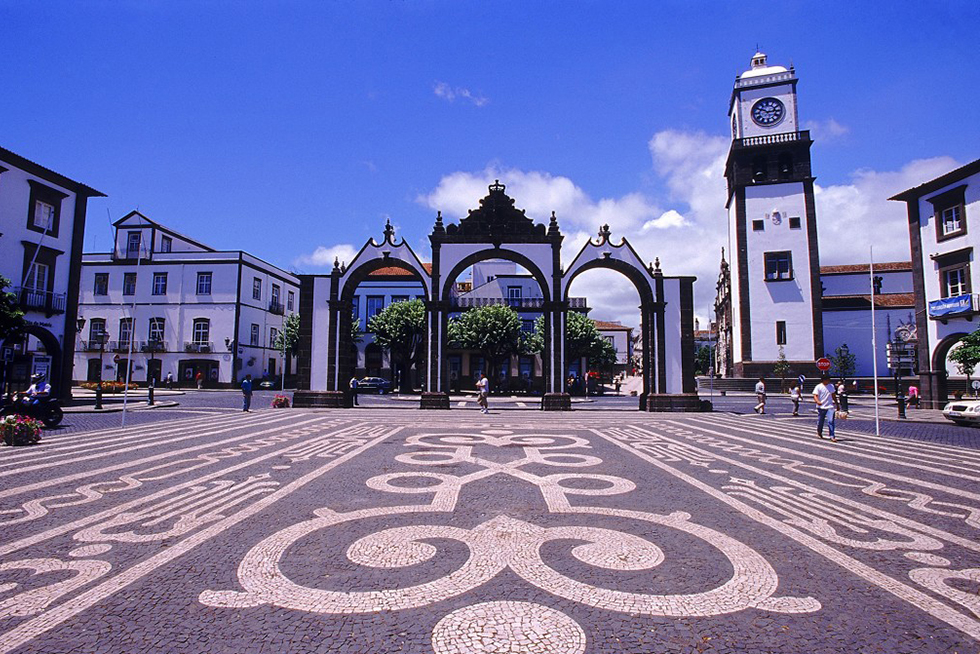 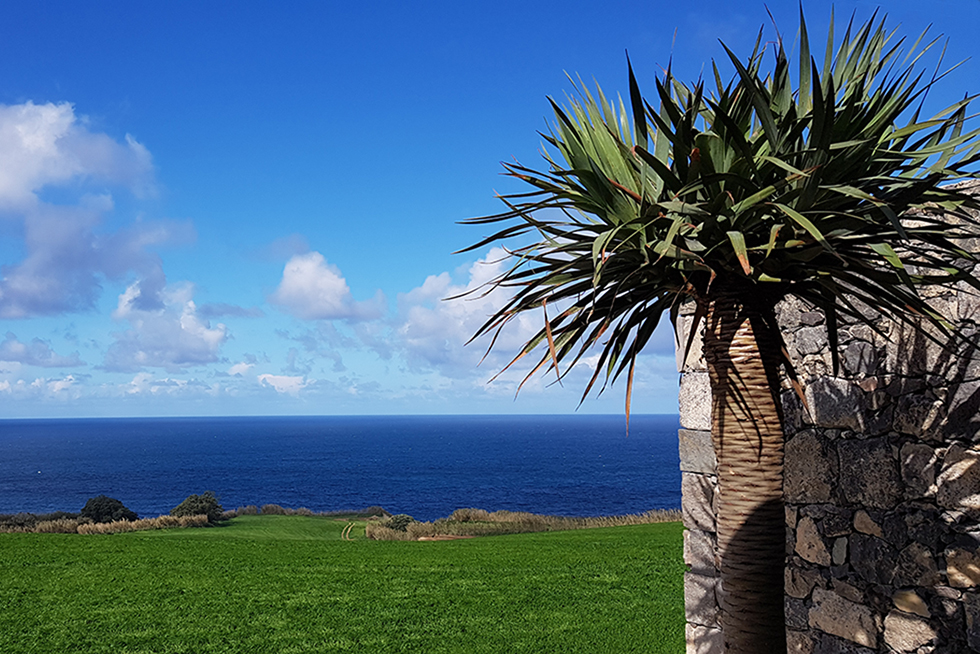 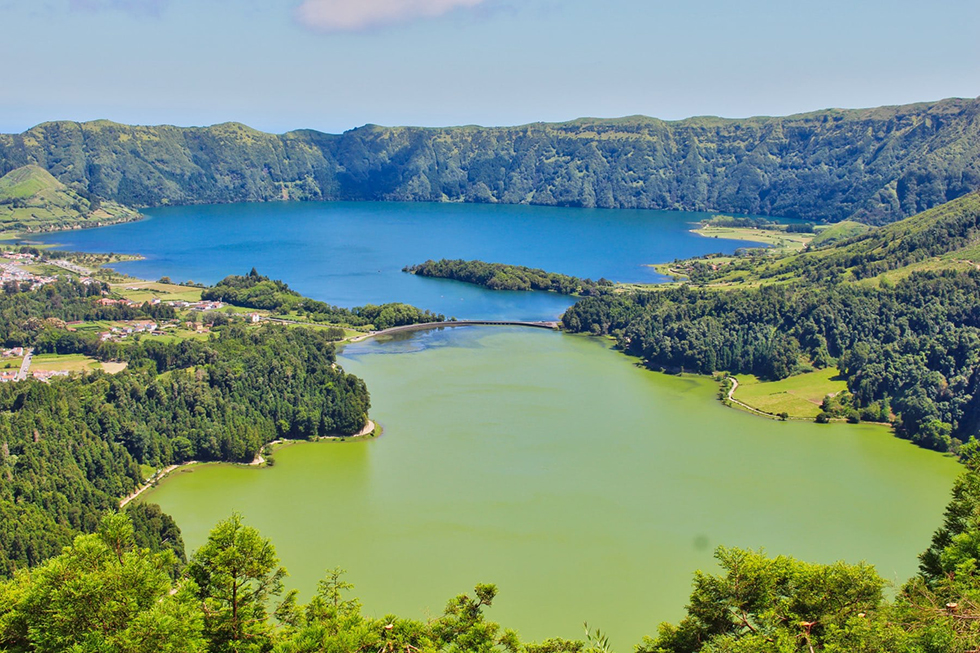 Direct transfer to your hotel. We suggest the new Sensi Azores Nature and Spa or Sul Villas & Spa, both on the outskirts of town, but with a breathtaking view overlooking the sea.

Depending on the time your flight arrives, on this day we suggest a stroll around the town of Ponta Delgada. São Miguel island was discovered in 1440 and, just 10 years after that, the region began being inhabited. The city is located next to the sea and its heart is characterized by the Portas da Cidade (City Doors), three arches built in the 18th century. Walking around will give you the chance of visiting the most interesting monuments and get to know a little bit of the history behind it.

We start by visiting one of the two only tea plantations in Europe, Gorreana — the other being Porto Formoso. Tea was introduced in Europe by the Portuguese, who brought it from China. The weather in the Azores is perfect for cultivating tea, which has been happening since the 18th century. In the 19th century, a major investment in this area made way for the hiring of two Chinese specialists, who came here to train the rest of the employees. In addition to the factory and the tea tasting, we can arrange for a special activity to show you all the secrets to the cultivation, leaf treatment, among others.

Driving through Achada das Furnas plateau, an area of pastures, you will reach the viewpoint of Pico do Ferro, from where we can observe the biggest and oldest volcanic crater, at the bottom of which lie the Furnas Lake and the Furnas Spa. It is one of the richest hot springs complex in the world, since there are 22 different kinds of mineral medicinal waters in the valley.

Around 12:30 PM you should be next to the hot spring where five hours earlier someone inserted the pot with your lunch. These hot springs in the Valley of Furnas are a volcanic phenomenon that is unique in the world, and the most important of the Azores. Watch your lunch being taken out under the ground and drive down to the village to feast on this wonderful Cozido — a traditional Portuguese stew composed of mainly meat, sausage, cabbage and potatoes — served by Terra Nostra Hotel.

After lunch, walk around the beautiful and romantic Terra Nostra Park, which will give you the chance to observe many different flora species from all over the world. In the park, there is also a thermal swimming pool. Return to your hotel driving along the Furnas lake, Vila Franca do Campo, which was the first capital of the island, and the beaches of Água D’Alto and Pópulo.

We set off into the sea looking for whales. In the sea of the Azores we can find 28 different cetaceans. On half-day tours, which have the duration of three hours, and accompanied by a marine biologist, we might be able to watch whales, dolphins, tortoises, and a number of seabirds.

After the boat trip, it is time to visit one of the Azores’ landmarks: the Lagoa das Sete Cidades. The tour will take the southwest road along the seashore, sprinkled all over by green pastures where the cows are calmly grazing. Stop at the viewpoint of Vista do Rei: a magnificent, breathtaking view over the lakes of Sete Cidades — the twinning green and blue lakes — awaits you, located on the bottom of a gigantic volcanic crater.

A picnic lunch will be set up in the area, the perfect time for you to try some of the Azores’ traditional flavors. We can also arrange for a stroll around that area or the neighboring Lagoa do Canário.

If you are interested in visiting a pineapple plantation inside greenhouses, we can also arrange for that.

For this day we suggest two distinct alternatives:

Option A – Take a full-day tour to the northeastern part of the island.

Departure from the hotel at 9 AM, driving through the south road of the island. Stop at Vila Franca do Campo, the first capital of the island, and visit São Miguel’s Church, one of the oldest churches here, built in Gothic style. Inside the church, a beautiful scenery of carved wood covered in gold on the altars. Don’t forget to stop by Adelino Morgado & Daughters and try their queijadas — a traditional pastry refined by nuns during the 17th century right here in Vila Franca.

Drive further down, passing by Furnas towards Povoação, on the southeastern part of the island and the site where Portuguese navigators first came ashore. Stop to walk on the waterfront. Drive on to Ponta da Madrugada, one of the most pleasant viewpoints in the island, overlooking the ocean.

The tour continues to the village of Nordeste. Lunch picnic at one of the picnic areas in Nordeste. Continue driving through several villages along a different landscape, on the foot of Pico da Vara, the highest mountain in the island.

Return to your hotel along the north side. You should be arriving at around 6 PM.

Start with a meet-and-greet at 9:30 AM at Quinta das Raiadas (close to the Ginetes church), which is followed by a presentation of ‘Passeio’, a symbiose of culture, history, art and faith of the Azorean people.

Drive towards Quinta das Raiadas and have fun milking a cow in order to prepare fresh cheese, which will be the appetizer. In the backyard, it is time to pick the vegetables for the soup and the salad that are going to be prepared. At 10:30 AM, drive to Casa da Massa with a stop at the viewpoint of Ilha Sabrina. After this, the lunch will begin being prepared.

There will also be traditional cookies that you will have a chance to try by the end of the day. As some of the typical dishes are cooked in a wood oven, guests might also get the chance to participate in this task. During the activities, a table with local products will be available for you with cheese, jam, drinks, and others.

Private transfer to the airport.